The multiplicity of infection (MOI) of the virus (bacteriophage) explained

The actual number of phages or viruses that will enter any given cell is a statistical process: some cells may absorb more than one virus particle while others may not absorb any (it is a matter of assumption and probability). The probability that a cell will absorb n virus particles when inoculated with an MOI of m can be calculated for a given population using a Poisson distribution.

In fact, the infectivity of the virus in question will alter this relationship. One way around this is to use a functional definition of infectious particles rather than a strict count, such as a plaque-forming unit.

which is approximately equal to m for small values of m << 1. 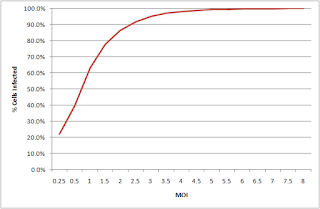 MOI is one of the important parameters in the phage research world. It is important for one interested in phage work to know how to do this practically
References