In general, there are 5 steps for phage display technology as below:

Recombinant DNA technology is used to incorporate foreign cDNA into viral DNA. Different sets of genes are inserted into the genomes of multiple phages. Spliced into genes for a coat protein to display the protein on the outside of phage particles. These individual phages will only display one protein, peptide, or antibody.

These libraries are exposed to selected targets, and only some phages will interact with targets. The target is specific ligands planned to be identified, such as immobilized protein, cell surface protein, or vascular endothelium.

Unbound phages can be washed away, and only those which show an affinity for the receptors are left.

Recovery of the target-bound phage by elution.

Eluted phages showing specificity are used to infect new host cells for amplification or direct bacterial infection and amplification of the recovered phage.

Back to step 1, repeated cycle 2-3 times for stepwise selection of best binding sequence. After that, you can Enrichment and purification the phage repertoire by precipitation methods to increase the phage titer. 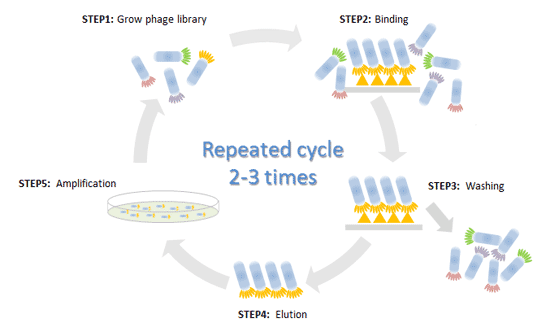