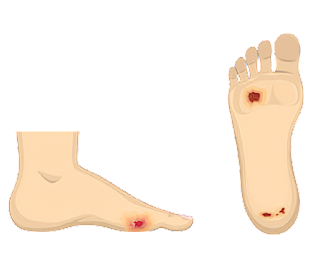 Wounds are injuries as a result of a break in the continuity of any bodily tissue. They include cuts, scrapes, punctured skin, and scratches just to mention a few. Wounds usually heal within a couple of weeks in most cases. However, some medical conditions, such as diabetes, can slow down the healing process and make infections more likely. In the case of an infected wound, it is necessary to apply substances that prevent the infection from spreading. Antibiotics and other antibacterial preparations, such as phages, are options. Unlike antibiotics, which are commonly used to treat infected wounds, phage preparations are more like personalized medicine.

Diabetes increases the risk of infection and other serious consequences on wounds; most infections are caused by bacteria. If wounds are not treated, they can develop into ulcers, also known as diabetic sores. A diabetic sore may resemble a blister or burn in its early stages.  The best way to avoid all of this is to treat the fresh wound as soon as possible, eliminating the possibility of infection. Diabetes does not always result in slow-healing wounds such as chronic diabetic foot ulcers. However, there are some factors like high blood sugar e.t.c that increase your chances of having healing issues. Smoking increases the risk of complications that can lead to chronic diabetic wounds in diabetic patients. There are several explanations for this, including:
If you currently smoke, giving up smoking is one of the greatest things you can really do to improve your general health as well as your body’s potential to regenerate.

On the topic of infected diabetic wounds, antibiotics are currently the most commonly used in most parts of the world. Antibiotics are widely known to have a broad range of clearing the pathogenic organisms in the wound thus the perfect candidate to use. However, the recent booming of antibiotic resistance and the formation of superbugs has caused all sorts of changes in how we see when it comes to treating infectious diseases. These antibiotics are no longer working on the bacteria (Read on the comparison between phage therapy and antibiotics therapy). On the other hand, bacteriophages are thought to be a natural gift that can help to solve this misfortune of the human race. Among other application trials, these “alien” looking viral particles have been used to treat diabetic wounds.

Phages have been used for centuries in some parts of the world to treat bacterial infections, including wound infections. However, fewer studies on this topic have been published from these areas in comparison to how extensively they use phages as a treatment option. In other parts of the world, such as the United States of America, where phage therapy is not routine, animal studies and randomized controlled trials with volunteers have clearly demonstrated the efficacy of phage therapy in treating diabetic wounds. Professionals prepare and thoroughly screen the phages used in these studies to ensure they are safe for therapeutic applications.
Phages have a disadvantage (Read more about disadvantages of phage therapy) that appears to be an advantage: they are so specific that they may be less applicable in cases of multiple infections. However, specificity implies that less normal flora is disturbed. Phage cocktails can be used in multiple infections to widen the host range, but the fact remains that the source of the infection must be isolated and screened against the phage in the lab before treating the patient, which may delay intervention. More research is being conducted to determine its applicability, but this does not overshadow the overwhelmingly flourishing of phage therapy for the outstanding results in cases where antibiotics have failed.
Click here to read about some recent studies highlighting the use of phage therapy on diabetic wounds (This link is external and is subject to change since it points to search engine results)
(Visited 16 times, 1 visits today)
Last modified: January 1, 2023
← Previous Story
Temperate and lysogenic infection: Are they the same?
→